10 Reasons Why Micro-Influencers Can Impact Your SaaS Marketing Today

10 Reasons Why Micro-Influencers Can Impact Your SaaS Marketing Today

Micro influencers are quickly becoming one of the latest trends in SaaS marketing.
Marketers are starting to drift away from celebrities with large followers to people with fewer, but more engaged followers. They are now adopting strategies that focus more on qualitative results instead of the quantitative aspects of social media influence in gaining an audience.

In influencer marketing, size matters. Influencers are usually classed into these four groups based on their count:

This chart from Blogs Release illustrates it better:

Markerly recently carried out a study and found that influencers that have smaller followings actually have higher post engagement than influencers with larger followings.

As a proof, Expertcity conducted a study which revealed that micro influencers have a higher significant impact on followers in comparison to other influencers.

Here are some interesting findings from the study:

More so, creating micro influencer campaigns for your SaaS marketing offers the ability to mount promotions that are affordable and more frequent than those that work with Top Influencers.

That being said, let’s look at 10 reasons why micro-influencers can make a big impact for your SaaS business today.

One of the added value points micro-influencers bring is that they are affordable to work with. This makes them ideal for brands that have a limited budget — and are experimenting with influencer marketing to grow their brand.

Bloglovin carried out a study of 2,500 micro influencers. The study revealed that 84% of micro-influencers charge $250 or less per post, while 97% do not charge more than $500 for one Instagram post.

The charges are more or less similar for charges on other social platforms such as blogs, Facebook, and Twitter.

Also from Bloglovin’s study, $5,000 is enough to reach out to about 315,000 followers on any platform when working with micro-influencers.

Whereas, with the same amount, you can only reach out to about 200,000 people on Instagram and 125,000 people on Facebook with other influencers. 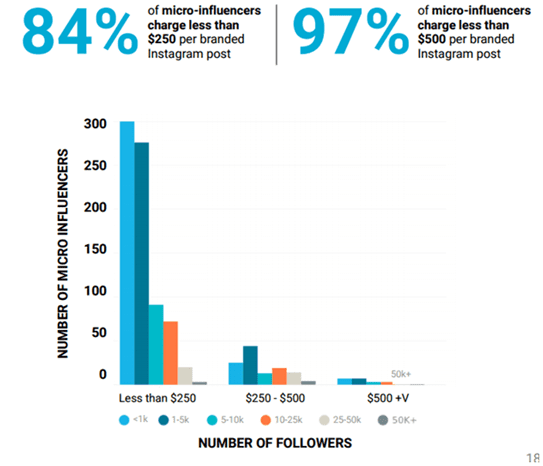 When you work with micro influencers, you will save money and time as you reach out to people who have a significant, yet targeted social media presence.  It’s equally a viable way to reach a lot more people and raise awareness about your SaaS business.

It’s sometimes difficult for celebrities to convince followers about using/purchasing certain products or services. For instance, pop music star Taylor Swift has millions of Twitter followers. However, she probably wouldn’t look authentic if she was talking about the benefits of a SaaS platform. There is a reasonable disconnect between celebrities and many common products and services that the average consumer or business uses every day.

Whereas, micro influencers are more like the rest of us. The social following that micro influencers gather is therefore directly related to their approachability or the strong connection that consumers will feel to an “average person.”

Consumers, in fact, find tremendous value in any product endorsements made by micro-influencers.

Because micro-influencers influence purchase decisions in an honest way: by simply sharing the products and brands that they use and love.

3). Micro-influencers are easier to engage with

Celebrity influencers utilize multiple facets to run their entertainment enterprises. They have opportunities to earn advertising revenue from endorsements. Therefore, they have a full-time responsibility of maintaining their resonance and popularity with fans.

As a result, they wouldn’t want to fill their social media ecosystem with blatant product or service endorsements; their fans would notice this, and may not like it. Also, when celebrities mention anything about products they like, they are often criticized for it. Therefore, celebrity influencers are very selective about the businesses to work with and the products/services to endorse.

Micro-influencers however, are not approached as often by advertisers. This makes them easier to engage.

Consumers are more skeptical of traditional advertisements than ever before. In the early days of the internet, marketers ran the same laid out banner ad on their website header and then multiple ads units in their sidebar.

These advertisements may have worked in the 1990’s. But today, they’re turning off today’s consumers, who often use software to prevent these ads from being displayed, with 26 percent of desktop users and 15 percent of mobile consumers using blockers to remove ads from marketers’ websites.

So, even if you come up with a great ad that can offer decent conversion rates, many prospects use ad blockers and will never see what you have to offer..

According to a case study by Nielsen Catalina Solutions and TapInfluence, micro influencer content generates ROI that is 11 times greater than traditional digital campaigns.

There is plenty of data available that proves how effective it can be. This study showed that micro influencer campaigns earn $6.85 for every $1.00 spent. These are solid statistics.

Will it work for every single SaaS marketing business under the sun? Of course not.

That’s because no marketing strategy or approach has a 100 percent success rate. But, there is enough information out there that suggests micro influencer marketing is something every brand should at least explore.

6). Micro-influencers place your offer where your target audience is most active

Imagine that a SaaS brand partners with a celebrity influencer with millions of followers. The celebrity would surely reach out to a large pool but a larger portion of these followers may not be interested in fashionable shoes, assuming that’s the product.

But if the SaaS brand partners with a micro influencer with 1,000 followers, it would be able to connect to a smaller but far more targeted and engaged audience.

In fact, 82% of customers surveyed by Experticity said they would likely follow a recommendation from a micro influencer.

7). Micro-influencers have better engagement rates than larger ones

As a SaaS marketer, Markerly recommends that you engage micro influencers with followers in the 1,000-10,000 range. With micro-influencers, brands can achieve higher engagement rates among a large enough audience.

Micro influencers’ blogs are more likely to post specific, even niche topics. Majority of these micro influencers are subject matter experts and have dedicated followers who share their passion.

When it comes to micro influencers, you can find SaaS bloggers, Digital marketing Instagrammers, and YouTubers.

For example, if you’re looking to connect with startup influencers on Twitter, simply enter the term “startup entrepreneur” on the Twitter search box. You’ll find many influencers to follow and learn from.

Though you’re concerned about quality, bear in mind that the more micro influencers you’re able to build a relationship with, the more chances you have to make a bigger impact and boost your bottom line.

Top and celebrity influencers are in high demand. Remember, they are famous and everybody knows who they are, so brands both small and large are striving to get these influencers to work with them.

However, it is hard to get their attention. And even if you do, it will probably cost you a lot of money. Top influencers with about 4 million followers can demand more than tens of thousands of dollars per post.

For many startups and SaaS businesses, this doesn’t make sense. After all, most celebrities are unlikely to work with your product.

Though many micro influencers do receive many requests, they are more approachable and their charges are much more reasonable.

10). Micro influencers offer a more personal relationships with their followers

There is a tendency that micro influencers would have a real, personal relationships with the majority of their followers since most of the micro-influencers started out with their friends as their initial follower base and grew from there.

Micro influencers also have more time to interact with their followers, responding to their comments, answering their questions and emails than top influencers can.

This strengthens the intimate relationship between micro influencers and their followers, leading to a greater engagement and more value being placed on the influencers’ recommendations.

Take the next step

I’m sure you now know how micro influencers can make a bigger impact for your SaaS business. They help you engage your target audience and drive more conversions because they are closer to your ideal customers.

In addition, they are much more affordable to work with — which means they are suitable for small SaaS marketing and startups. Contact us at 99MediaLab today so we can get your SaaS company’s marketing strategy up and running on the right foot.

Know someone who could
benefit from our services?